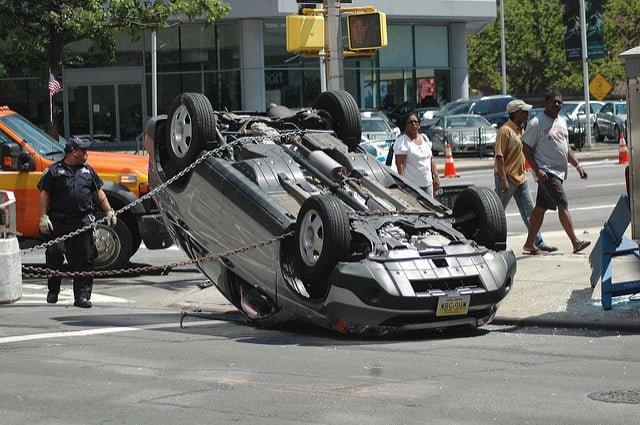 How to tell who is at fault in a car accident?

To be able to determine who is at fault in a car accident, a lot of data must be sorted through. In some cases, witnesses will also have to be gathered before a decision can be made as to who is at fault in an accident. It is extremely important to make sure that you get vital contact information from the other driver at the scene. Make sure that you get the driver’s name and address, their insurance company and policy information as well as any statements and contact information from witnesses. It is also a good idea to take pictures of the accident scene whenever possible. At this point in time, you hand the papers over to your insurer, tell them the facts and the police will determine who is at fault.

Car accident determining fault by location of the damage

Who is at fault in a car accident T-bone?

In the event of a T-bone accident, the driver of either vehicle can be at fault for the collision. In fact, in a T-bone accident, more than one driver can be at fault at the same time. The person who is at fault is often the person who got T-boned. The rules state that whoever had the right-of-way at the time of the accident is the person who is not at fault. This means that running a red light or sitting in an intersection when you aren’t supposed to will result in you being at fault if you get into an accident.

When a driver puts on their left blinker the law states that they must yield the right-of-way to the oncoming traffic that is traveling in the opposite direction. What this essentially means in terms of determining if you are at fault in the event of an accident, is that the person who is turning left is almost always at fault. This isn’t always the case, but the person who is turning left is going to have a much more difficult case proving that they were the one who was in the right.

Who is at fault in a car accident changing lanes?

The person who is at fault when changing lanes is always the person who impacts the car in the lane that they are moving to. Once a car moves over the line, they risk being at fault for hitting another vehicle in the new lane.

Deciding to dispute a claim

If you believe that the other person is at fault in your accident, your first step is to determine if you need to dispute the claim. Disputing a claim might need to be done if the insurer refuses to cover a claim or if you believe that an insurer did not appraise the damage that was done in a fair manner.  To decide if it is worth disputing a claim, you might want to have the damage appraised. This is something that you can use as evidence against the insurance company, especially if you don’t think they appraised the damage correctly. Make sure that you keep all communication between you and the insurance company as well the dates of the communication. If you have communication evidence or any kind of evidence that you think is worth a claim dispute, you can now move to dispute your claim.

How to dispute a car accident fault?

It is extremely important to make sure that you take proper documentation after an accident, especially if you don’t think that you are at fault. If you cannot make proper documentation after an accident as a result of an accident injury, it is a good idea to attempt to get someone else to document for you. The more evidence you have to help support your case, the better your odds are for not being at fault in an accident. Hopefully, you now feel as though you have a better understanding of who is at fault in the event of an accident. Drive safe and be careful!