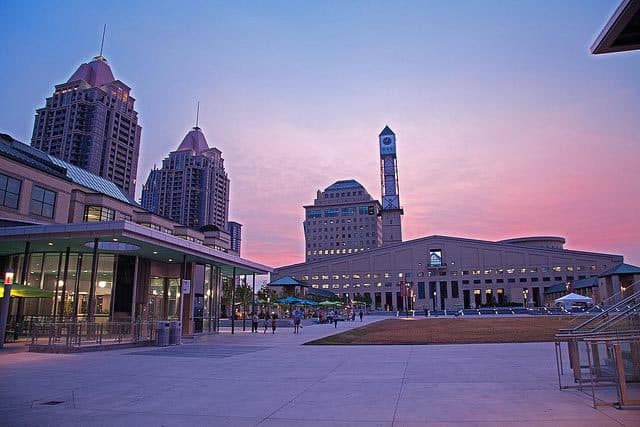 Mississauga is situated next to Toronto on Lake Ontario. This is the sixth-largest city in Canada and a very popular destination for shoppers. It is home to some big corporate giants. The city has one of the busiest airports in Canada, the Toronto Pearson International Airport. This is a multicultural city with many festivals all around the year. This is also reflected in the unique street names such as Indian Line, Latvia Court among others.

The population of Mississauga is growing rapidly and has led to more road traffic. Collisions are on the rise too. Highways run across the city connecting each town. And Japanese cars seem to be a favorite among motorists. Talk about high speed and tech-savvy! Getting insurance coverage for the vehicles is mandatory as per Ontario FSCO regulations. And, competition is high in the insurance sector.

Who Has the Cheapest Car Insurance Quotes in Mississauga

Most Expensive Auto Insurer in Mississauga

Mississauga is a big city with a dense population. So, the risk factor is also high when calculating premiums. Comparing the apple to apple strategy may not be possible when it comes to car insurance. As per our comparison, the most expensive auto insurance quote was by Echelon at $4,884. This company is amongst the few companies that do provide high-risk car insurance in Ontario. That may be a reason why the quote came up so high.

There are various criteria that insurers consider when calculating car insurance premiums. The driver record, vehicle history, risk score, location, etc. are some of the criteria. We made a comparison of car insurance quotes between major insurers in Mississauga. The lowest quote was by Johnson at an average annual premium of $2,717. The next lowest quote was about $100 expensive. As we look at the difference in the highest and lowest quotes it is a steep $2,167. That is a wide range of almost 45%.

Most Expensive Areas in Mississauga

The Streetsville area in Mississauga seems to have the most expensive car insurance rates at an average annual premium of $1,802. It is a small town with good proximity to downtown. Recently, the crime rate in this area has risen and may be a reason for a high insurance quote.

Following next in the expensive category is Rockwood Village at $1,626. The difference in the quotes is $176 which is a huge margin. The area is mostly upscale with urban dwellings and road traffic is also increasing in this area day today.

As per the comparison, we did about car insurance rates in some popular neighborhoods, the Clarkson area in Mississauga had the cheapest quote at $1,362. The difference amount between Streetsville and Clarkson area was a staggering $1,662. Given a choice, it may not be a surprise if a new motorist moving into Mississauga may prefer living in Clarkson due to the low car premiums.

The next best quote was for the Cooksville area at $1,626 annually with a difference of $264 compared to Clarkson. That is a huge variation in the rates between both areas.

In Mississauga, the road traffic is becoming busier by the day. There are many initiatives taken by the traffic administration in the city for better road safety. But there are also a lot that motorists could be mindful of as follows.

Speed down in small towns-  It is recommended to speed down in municipality areas. The city speed limits are around 40 to 80 km/hr and some areas have limits set at 50 km/hr. In the case of any developments for spacing driveways or more pedestrians using the road, it is best to stay below or at the posted speed limit to avoid an incident.

Cautious driving around safety zones- Special Community safety areas are spread out in many parts of Mississauga such as near schools, childcare centers or elderly care facilities. Speeding in such zones is a strict no as fines are pretty high if caught doing so.

There are many programs geared towards better safety in Mississauga by traffic and works departments. Some of the active traffic safety initiatives are as follows.

Program for Red Light Cameras- At the moment, 26 sites of the Peel region which includes Mississauga have cameras installed in intersections with frequent collisions at right angles.

Crosswalks- Ladder painting on crosswalks is now on 88% of the entire traffic network.

Miovision Data- Video footage is being currently recorded at many sites to monitor the traffic patterns for collecting data.

Radar Speed- There are trailers at specific targets that are moved periodically to educate the public about speed warnings.

Right-Turn Channels – This smart plan is for better pedestrian visibility, ease of knowing the speed of approaching vehicles even from left angles, and reduced need for the property.

Signal Heads for Pedestrians- The countdown signal heads to aid with crossing are active at about 52% of the traffic network.

Speed Methodology- A lot of data analysis for a better understanding of speed requirements is being done for road safety.

When we looked at the data for collision with respect to property damage and fatal injuries there has been a decrease. Over a span of 2 years, the total number of collisions had decreased by about 141 incidents. The property damage incidents came down by 245. On the other hand, the instances of injuries that were not fatal increased by 136. It is also worth noting that the population is estimated to have risen by 32000 and that means more road traffic. The numbers for fatal injury remained stable over 2011-2012 at 7.

When we look into more details as per categories in the collision numbers, incidents with cyclists are increasing at around 32% over a 2-year span. Some numbers have improved in terms of collisions due to trucks and just a tiny bit for pedestrian accidents. There does not seem to be much consistency related to the month of the year or the days of the month for the comparison of collision data. But it does look predictable that 5 pm looks like not the best time to be on the roads with the highest number of accidents around that time as per data for 2010-2012. The most common driving mistake that motorists could pay attention to is to avoid following other vehicles too closely. It is better to maintain safe distances and avoid accidents.

The following are the 26 active red light camera sites.

As per the above map, the 26 active sites for red-light cameras have been pretty spreading out across the Peel region. There are many more sites planned to have the red light cameras installed to improve adherence. These cameras have helped to reduce the number of collisions due to right-angle turns at the intersections. The timeframe of 3 weeks is all that is allowed between the violations and the time the traffic tickets are mailed to the offenders.

As per the above chart for collision statistics in a 3-year span, there is consistency in total criminal offenses for driving at 5257. The number of offenses for driving under impaired conditions has risen by 125 over 2014 to 2015. But the numbers for failure to remain/stop instances have dropped by 115. There is a reduction of 11 instances of dangerous operation by motorists over 2014 to 2015 that needs to be improved to avoid collisions. Of all the types of offenses in the above chart, the numbers for failure to remain/stop are very high in proportion compared to other offenses.

In order to conduct the survey, we assumed that our sample is a Honda Civic driver aged 35 with no tickets or traffic violations in the last 5 years. The comparison charts have been made as an estimate only and quotes may vary with each insurer in Mississauga based on different factors.