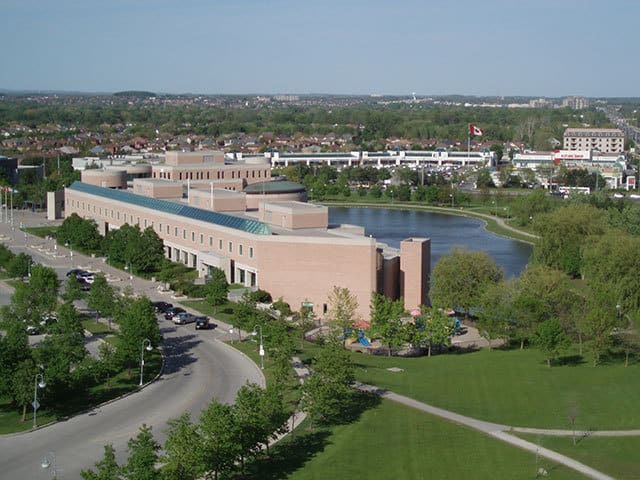 Markham is a city within the Greater Toronto Area in the York Municipality. It is the 16th largest Canadian city with a population estimated at 301,709 as per the census in 2011. The city of Markham is home to many multinational companies related to technology and business services. There are over 12 bridges connecting roadways along with scenic views. Some of the major highways serving this area include Highway 404,407 and 7.

We were interested in checking and comparing car insurance rates in some popular neighborhoods in Markham. A survey was also done using a sample profile to calculate quotes for various car insurance companies in this city.

Who Has the Cheapest Car Insurance Quotes in Markham

Most Expensive Auto Insurer in Markham

As per the above chart for comparing car insurance quotes, the highest annual rate was by Echelon at $4,751. The difference in premiums between their quote and the lowest rate was $2168. This is around 45% of a variation in prices. Echelon provides insurance to high-risk auto consumers who are unable to get insurance in the regular market. The next highest quote was by CAA with an annual rate for car insurance of $4028. The difference in their quote and highest was by $700.

The comparison revealed that the lowest car insurance quote was by Johnson Insurance at an annual premium of $2583. The next low quote was by Coseco Insurance at a difference of $36. There are many factors that car insurance companies use to calculate premiums. The location, age of driver and vehicle, driving record, tickets, or violations are some criteria that affect rates.

Most Expensive Areas For Car Insurance in Markham

As per the comparison chart, we did for car insurance rates in some of the neighborhoods in Markham, the highest quote was for the Cedar Grove area. This is a small historic community which is located on 14th Avenue and Reesor Road. Most of the land here is still for farming purposes with more residential areas towards the west side. There are about 6 schools in this small town.

The same insurance rate was quoted for the Box Grove area too which is also in east Markham. A major part of this area has changed from agricultural to residential. It is located in Box Grove by-pass and 14th Avenue. There are about 4 schools serving this area now.

The comparison chart showed that the lowest quote for car insurance rate was for German Mills at an annual rate of $1349. This town comes under the Thornhill area and is mostly residential. Those who do not use York Region Transit prefer to drive their cars for commuting. The next lowest quote for car insurance was for Dickson Hill at a difference of $43 higher. This area is located near 19th Avenue and Highway 48. Most areas in this town are agricultural. Dickson Hill is just south of Markham Airport and there are proposals for another airport coming up on the southeast side.

Since Markham comes under the York region, there are many road safety initiatives. The York Region Road Watch is an initiative for reducing aggressive driving behavior by creating public awareness, education, and enforcement. This is also helping to prevent or reduce injury and fatalities due to collisions.

There is a yearly appraisal of road conditions to identify problem areas for traffic. This is intended to reduce collisions in this region. The results of appraisals are used to increase public awareness, enforce the law, improvise road intersections, and better designing of roads for safety. There are about 825 traffic and pedestrian signals managed by the York Region.

Safety Tips for Motorists of Markham

There are about 11 sites for red-light cameras and there will be 29 new sites added by 2017.

There are 16 boards for speed display that counts for 2 per ward. These boards are kept at strategic locations for 2 months each time to monitor vehicle speeds and safety issues.

Another community-based road safety initiative is the Road Watch Program which allows the public to report aggressive driving. Some unruly driving actions include unsafe changes of lanes, speeding, disobedience of traffic rules and lights and ignoring stop signs, etc.

This program was launched in 2011 to advocate mutual respect between pedestrians and motorists to reduce fatalities and collisions.

The program is designed to reduce the use of cell phones while driving or walking near traffic. This will help to reduce collisions and injuries due to distraction.

There was a comparison chart presented in the Annual Safety Report by the York Region Police for 2015. It is evident that in 2009 the number of fatal collisions was at an all-time low in 2005. The highest number of collisions and fatalities were reported in 2010. Since then there was a dip in number in 2011. The trend has again started to show an upward graph during 2011-2013. Now the latest data for 2014 has started to look a little better on statistics for Markham.