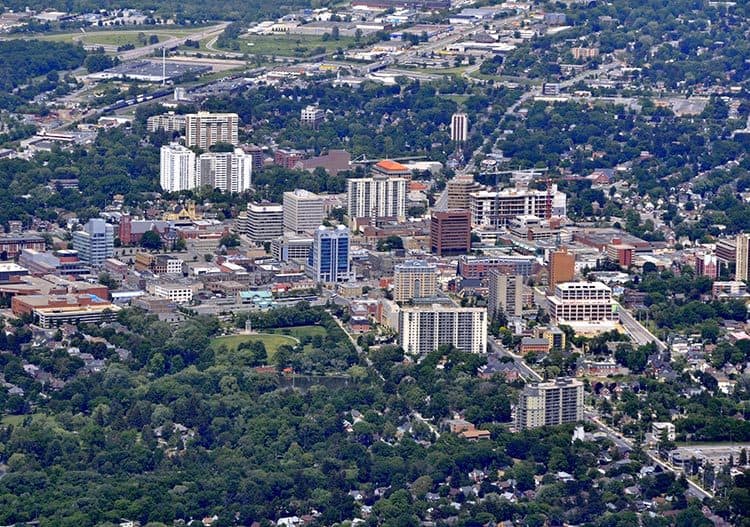 Kitchener is located in southern Ontario and is part of Waterloo Municipality. It is the largest city there with an estimated diverse population of about 219,153 as per the 2011 census. Home to the famous Oktoberfest, the street design of Kitchener is different from other cities. A continental radial design of the streets is more complex. We did a survey to check how much it would cost for car insurance provided by various insurers. We also compared the quotes for major neighborhoods to know the range in pricing as per the location. The postal code of the insured is very crucial to insurance companies to calculate premiums.

Who Has the Cheapest Car Insurance Quotes in Kitchener

Most Expensive Auto Insurer in Kitchener

We compared the cost of car insurance provided by some major insurance companies in Kitchener using a sample profile. The highest quote was by Echelon at an annual rate of $3155 for car insurance. This insurer provides insurance to high-risk consumers too who had been declined cover by the regular market. The difference in premiums between their quote and the lowest premium was $1630 which is almost 52%. The next highest quote was by CAA at an annual premium of $2505 which was $650 cheaper than Echelon.

We did a comparison for various car insurers in Kitchener and the lowest quote was by Travelers (Dominion Product) at an annual rate of $1525. Closely, the next lower quote was by Travelers (Chieftain Product) at an annual premium of $1596.  By combining home and car insurance policies, the consumers could save up to 26% with these insurers. Insurance companies look at various factors to calculate premiums. Bundling policies could help to save a lot.

Most Expensive Areas For Car Insurance in Kitchener

We surveyed some neighborhoods in Kitchener to know the range in car insurance premiums. The highest quote for car insurance was for the Victoria Hills area at an annual premium of $1260.  This area is bounded by Highland Road in the south and by Glasgow Street in the north. The east side has Belmont Avenue and the west side has Fischer-Hallman. This is mostly a residential area and has many immigrant communities living together. Victoria Hills has easy access to Highway 7 and Highway 8 through Westmount Road. The airport is hardly a 20-minute drive away from here. All these proximities have caused the traffic to increase daily and are most expensive for car insurance in Kitchener City.

The lowest insurance quote as per the survey was for Bloomingdale at an annual car insurance premium of $1035. The same quote was calculated for the areas of Breslau, Bridgeport East, and Pioneer Tower West. These areas are closely located to each other and the postal codes have a similar calculation for car insurance rates.

The city of Kitchener has initiated many projects to improve road safety to tackle the growing traffic on its roads spanning about 550 km. There are construction projects underway to take care of repairs and pavement of roads. There is a master plan created to see the city with better transportation by 2031. The following strategies have been included in this master plan and are expected to be completed in 20 years.

The city has proposed and implemented some plans to reduce the speed of road traffic for the better safety of all road users. The City has taken many measures for traffic calming on Kitchener roads, sidewalks, and curbside.

The Waterloo Regional Police has taken many initiatives to combat aggressive behavior on the roads. They are responsible for the monitoring, enforcement, and investigation of road safety issues in Kitchener City too. Some of these initiatives include the following.

The above chart shows a comparison of collisions due to motor vehicles from 2014 to 2015 as per the annual report prepared by Waterloo Police. There has been an overall decrease of 6% in the total number of collisions. Fatal collisions data is stable but hit and run incidents have also decreased by about 7%.