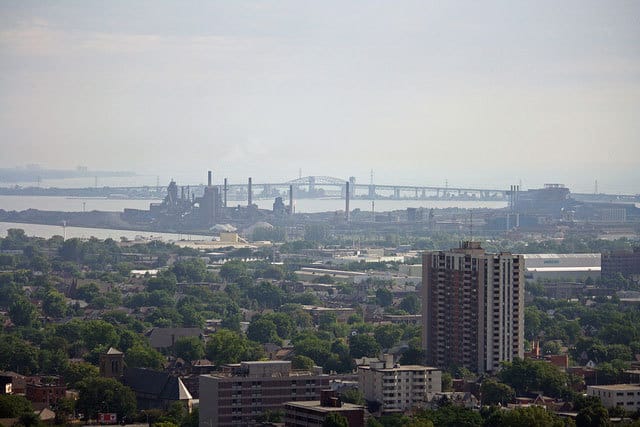 Hamilton is a port city located in the southern part of Ontario province. This city is dense in population which is estimated at 519,949 as per city 2011 census. It is considered an industrial and metropolitan area. The city is divided into two sections by an escarpment and is considered a major steel producer and Great Lakes Port.

Who Has the Cheapest Car Insurance Quotes in Hamilton

Most Expensive Auto Insurer in Hamilton

We compared some quotes to get an idea of how much it would cost for car insurance.  The most expensive auto insurer in Hamilton was Allstate Insurance with an annual rate of $4,350. The difference in premiums between their quote and the lowest rate was $2,237. That was almost a 51% variation. The only way to save if you have one of their policies seems to be by combining home and auto insurance.

The next highest quote was by Echelon at an annual insurance rate of $4,180 at a difference in premiums of $170. They provide insurance to high-risk clients who found it difficult to get insurance for various reasons. Some of them were driving infractions, DUI cases, suspensions, and high claims. Echelon could be the choice for those who are left with the only option of getting a policy through the Facility Association.

Out of all the insurance quotes compared the lowest was by Coseco at an annual rate of $2,113. For new drivers and those getting a renewal, it would be a great idea to check their rates and compare coverage. For someone starting to drive on the roads, getting cheaper insurance but good coverage is very important.  Coseco auto policies are administered by HB Group Insurance a member of The Co-operators group. Probably that could be a reason why the next closest lowest quote was by The Co-operators. That quote came up at an annual rate of $2,186 at just $63 higher.

Most Expensive Areas in Hamilton

We compared car insurance quotes around the neighborhoods in Hamilton using a sample driver and vehicle profile. The highest quote for car insurance was for Crown Point east area at an annual rate of $1,769. The Beasley area in Hamilton also had the same insurance rate which was 52% higher than the lowest quote. This is an area that is busy with many retail shops and will suit someone with a median budget.

The lowest quote for car insurance was for the Blakely area at an annual rate of just $857. This area is just a 25-minute walk away from downtown. The main boundaries are Sherman Avenue on the west, Main Street on the north, Gage Avenue to the east, Escarpment to the south. Many residents prefer to walk than drive and are considered a safe area to live in. The next lowest quote was for the Hamilton Beach area with an annual rate of $1,042 which is $185 higher. There are many streets that only allow traffic to move one way.

The city of Hamilton has many initiatives to improve traffic and road safety. Vision Zero plan is being proposed to minimize fatalities in road accidents. Distracted driving is strictly punishable with heavy fines ranging from $300 to $1000. There was a review of data for collisions in Hamilton between 2010- 2013 due to distracted driving.

There are 3 main types of pedestrian crossovers in Hamilton. There are more proposed locations for better road safety.

The city is responsible for installing and operating the red light cameras in specific sites. The province enforces regulations and violations. This program is aimed at reducing aggressive driving and educating motorists about hazards created by driving past the red lights. These cameras capture the license plate numbers of the vehicles that cross the intersection after the lights have turned red. There are 6 municipalities that participate in this program to stop this illegal driving action. The penalties are heavy at $325 per incident and 3 demerit points added to the license if a ticket is issued for not stopping.

The above table compares fatality data for traffic incidents in Ontario for 2014. The highest number of fatalities were reported for DUI accidents at 120 and accounted for 24.9% of total fatalities. The least number was reported involving motorcyclists at 56 and 11.60% of the total figure.

Synopsis of Collision Data for Ontario – 2014

The above table has statistics for fatalities, collisions, and injuries for different types of persons involved for the year 2014. The personal injury collisions were very high at 33617 that accounting for almost 98% of the total collisions. Out of these, fatal collisions were for 447. The numbers of pedestrians killed were 94 which was 72% more than the number of passengers killed in these collisions.