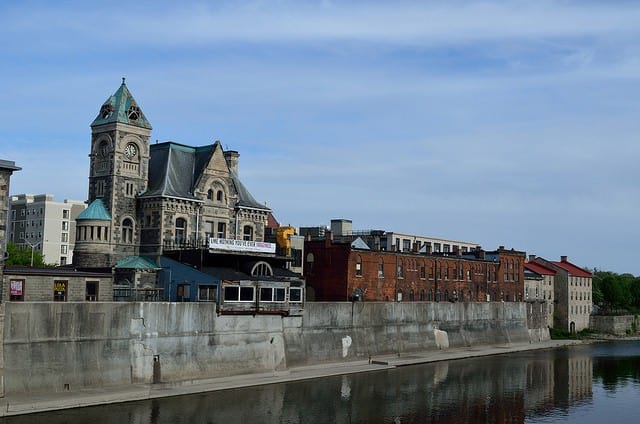 Cambridge belongs to the Regional Municipality of Waterloo in Southern Ontario. As per the 2011 census, the population estimate was 126,748. The famous Black Bridge Road is in this region. The 2 main arterial roads that run across the city are Highway 8 and 24. Highway 8 connects Shantz Hill Road, Coronation Boulevard, King Street, and Dundas Street to Waterloo and Kitchener on the west side. It connects on the east side to Hamilton. Highway 24 connects Water Street, Ainslie Street, and Hespeler Road on the northeast with Guelph and on the south side with Brantford. Grand River Transit is the major provider of public transportation and was formed by merging Kitchener Transit with Cambridge Transit.

Who Has the Cheapest Car Insurance Quotes in Cambridge

Most Expensive Auto Insurer in Cambridge

The table above shows that there are 2 price ranges for the major neighborhoods in Cambridge. The Blair and Hespeler areas had the lowest rate for car insurance at an annual cost of $1035. The Galt and Preston areas had a higher quote of annual cost at $1213. The variation in prices was $178 which was substantial to choose one area over the other if someone was to newly move into Cambridge.

The city of Cambridge has a master plan underway to manage the transportation network in an improved manner over the next 25 years. This transportation plan will focus on public transit, vehicles, cyclists, pedestrians, trucking, traffic control, commuting, and system support. The aim is to improve and maintain the Cambridge transportation network for the growing population and traffic. The city plan will be coordinated with the updated Waterloo Region master plan for long-range benefits as follows:

Driving Tips To Get To Cambridge

Cambridge city is conveniently located on the major Highway 401 and connects to the Greater Toronto Area and many international borders with the U.S. The following driving tips will help you get to Cambridge with easy access from 3 major routes.

Highway 401: Drive about 10km on Hespeler Road along highway 24 to the downtown side of Galt and then turn in the right direction to continue on Dickson Street.

Hamilton: Start from highway 8 on the north side to Beverly Street and then turn into left and then into Dickson Street on right.

The Region of Waterloo is responsible for the maintenance and repairs of traffic lights and traffic signs in the city and the regional roads of Cambridge.  The city promotes active transportation and encourages campaigns for a bicycle-friendly community. There are many projects that are aimed at creating awareness for on-road cycling in having healthy, economic, and environmental benefits. In order to do this, the engineering department for transportation maintains and implements all facilities on streets with signs and markings for safe on-road cycling. This campaign takes care of about 230 km of paved shoulders, bike lanes, signed routes, and wide shared use lands for on-road cycling. There are projects aimed at 50km along with the Speed and Grand rivers and natural off-road cycling trails.

The Regional Police of Waterloo actively surveys traffic issues that are a common concern for Cambridge. They have initiated programs to improve road safety by educating and enforcement of road users. The traffic branch was launched in 2002 as a traffic enforcement team of 5 officers. They work full time to monitor traffic issues related to violations of speeding, aggressive driving, and seat belt usage. They have ongoing projects for increasing awareness and enforcement of road safety. Waterloo Regional Police also investigates all traffic collisions leading to serious injuries and fatalities. They also follow up with collisions where offenders fail to remain at collision spots.

The above table had data gathered by the Regional Police of Waterloo for 2014 to 2015 as part of the Annual Report prepared for 2015. It is evident from the data that there is an increase in the total number of collisions from 2014 to 2015 by 10533 incidents. There has been no change to statistics for fatal collisions. There was a decrease in personal injury and property damage collisions by 2% and 7% respectively. The numbers for hit and run collisions also showed reduced numbers by 6%.

For the survey, we assumed that the auto insurance premiums are for a 35-year-old man as a sample driver. He owns his car Honda Civic model 2012. The credit rating is good and he has basic liability coverage. The annual mileage ranges from 5,000 to 8,000 with no traffic tickets in the last 5 years.